The Watermarks Project is an ongoing collaboration between members of the Conservation and Imaging teams from the British Library Qatar Foundation Partnership. In this project we have developed tools which highlight and reveal the watermarks found within a series of ship’s journals dating from 1605-1705, relating to the East India Company’s voyages. My role has involved drawing and digitising a collection of 78 watermarks that vary in design and complexity. Read about the process and techniques used to make these watermarks visible on the British Library’s Digital Scholarship blog. 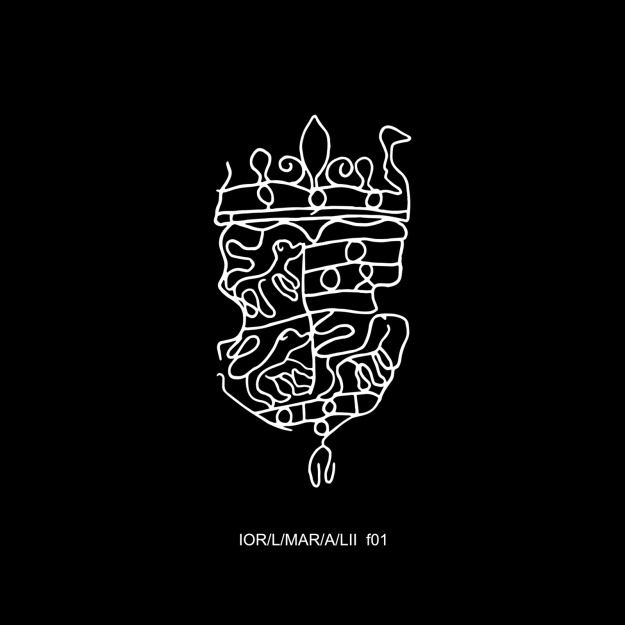 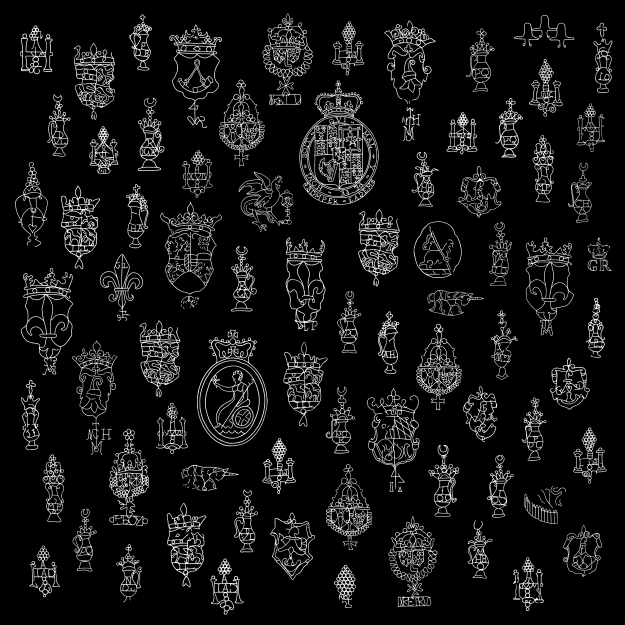 During the recent MA Visual Arts: Fine Art Digital low-residency, Smriti Mehra and I, Matt Lee, led a cyanotype printing workshop with students in collaboration with the British Library. The workshop began with an introduction to the process and looking at examples of cyanotypes from the British Library collection, including reproductions of blueprint maps from the Indian Office records and Anna Atkins’s self-published book of Photographs of British algae.

The morning was spent exploring the British Library archive and creating collages from an assortment of printed negatives from the British Library Qatar Foundation Partnership project collection. This rich and varied material included historical photographs, illustrations, maps, iconography, typography, patterns and textures. To cite a few examples, a striking portrait of a Meccan woman in bridal attire from 1887-1888, a strangely surreal illustration of a Waqwaq tree from a 17th century Persian manuscript and landscape photographs of a Central Persian trade route from 1901. Using this diverse archive as a starting point, the students worked intuitively and conceptually in response to the images, creating juxtapositions, patterns, narratives and incorporating the technique into their creative practices. The workshop was an opportunity to play with the material to explore meaning and form. The collages were then placed on top of the photosensitive paper and exposed under UV light in a darkroom. The prints were developed, washed and rinsed to reveal vivid Prussian blue monochromatic images, which were left to dry and darken over the next twenty-four hours.

The workshop was followed by a visit to the British Library Qatar Foundation Partnership project in St Pancras. Here a team of photographers, conservators, translators and cataloguers work together to make collection items related to the history of the Gulf and Arabic science available online via the QDL portal. In the conservation studio, we were introduced to paper conservation, binding techniques and shown examples of collection items undergoing conservation treatment. In the imaging studio, students were shown the plethora of specialist equipment used by imaging technicians to photograph a range of items, including Arabic manuscripts, books, loose-leaf items, maps, photographs and vinyl records. Students then shared their cyanotype prints with British Library staff, who in turn shared some of the creative projects they have worked on during Hack Days, where the imaging team respond to this historical material across different contexts. A zine by Hannah Nagle examined data and gender inequality through the collection, an animation by Renata Kaminska drew attention to damage in one manuscript caused by insects and Darran Murray’s interactive photogrammetry project of an astrolabe quadrant. The workshop and this interaction opened up a dialogue with the students of how historic material may be accessed by different creative practitioners, in different ways, making it relevant and being a valuable resource to build ideas from. 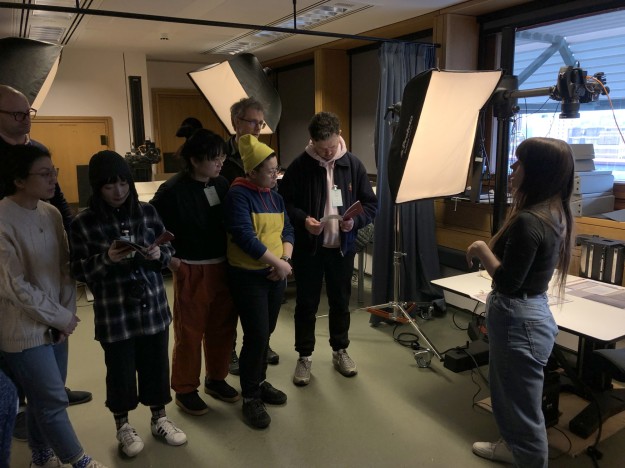 The tour ended with a viewing of a rare book of original cyanotypes by Julia Herschel – ‘A handbook of Greek Lace Making’ published in 1870. A selection of cyanotype prints from the workshop were then photographed in one of the British Library’s imaging studios. The intention is to create a zine for possible inclusion in the British Library’s permanent collection.

For artists wishing to explore the British Library collections, their Flickr account offers open access to public domain images and encourages people to explore and re-use. Images can also be downloaded from the Qatar Digital Library, which contains collection items that relate to the Gulf Region. The British Library Labs also support creative projects that use collections in innovative and inspiring ways.

I have written an article for Archivoz: International Archives Magazine about Indian matchboxes. The article discusses the visual and social significance of these objects as well as my personal journey through collecting, archiving and digitising over 750 labels.

Archivoz is an informative digital journal in blog format relating to archives and records management.

Last week I led a collage and cyanotype printing workshop alongside members of the British Library imaging team for BL Qatar Project staff.

Using examples from the British Library archive, this workshop explored the vernacular of the cyanotype technique and connected it to the history of invention, photography, image reproduction and information distribution. We printed digital negatives on acetate sheets using visual material from the British Library collection, which included historical photographs, illustrations, maps, diagrams, typography, patterns and textures. Participants cut up this material to create collages that were then placed on top of paper coated with light-sensitive chemicals and exposed in sunlight.

A selection of prints from this workshop will be used on posters to promote the 3rd British Library Hack Day. 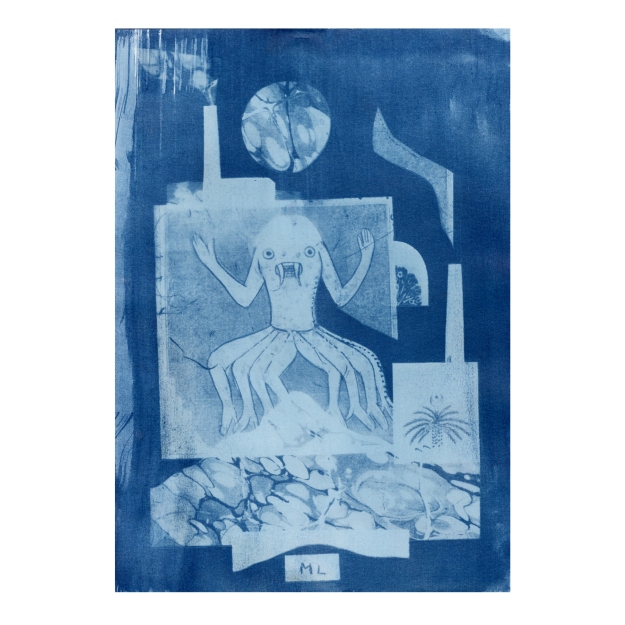 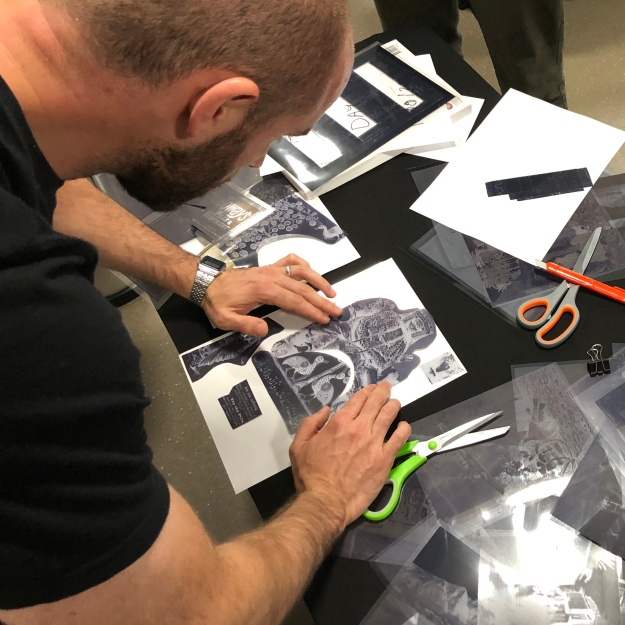 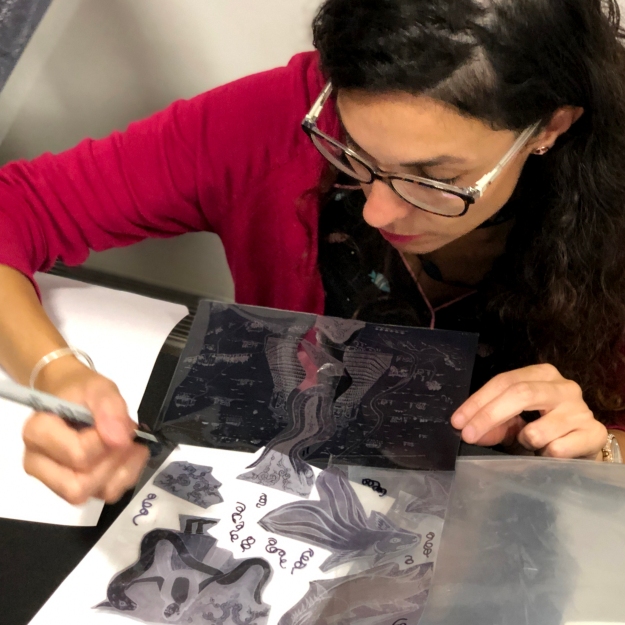 Into the Void is an award-winning nonprofit print and digital literary magazine dedicated to providing a platform for fantastic fiction, nonfiction, poetry, and visual art. I am happy to contribute one of my photographs to the latest issue, which is now available to read online and in print.

The current issue can be read online at the link below.

Print copies of the magazine can be purchased from the store.

There is a certain playful unknowability to Matt Lee’s work. As preoccupied with structure as its inverse, Lee’s pieces suggest an interaction with the intangible that is at once wholly serious and strangely lighthearted. Confronted by subjects like death, absence, and emptiness, a viewer might expect an oeuvre weighted down by existential dread, but in Lee’s work, these subjects become lively participants in conversation with their environs. Though they offer little in the way of consolation about oblivion, Lee’s pieces propose a wry characterization of the unknown that is rather cheeky; death may be coming, but it feels oddly familiar. 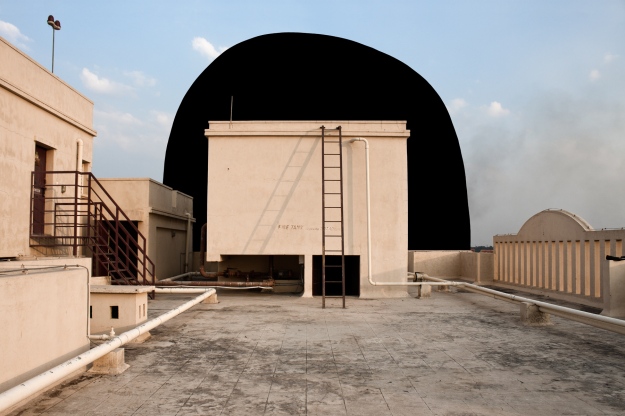 In the aptly named series Presence of Absence (2011), emptiness is a figurative entity intruding upon the mundane. Lee created this series in response to his move to Bangalore, as he tried to make sense of his new home. A viewer might imagine the artist being surrounded by signs full of meaning but rendered meaningless by unfamiliarity. In the series, absence is made into an insistent material presence. As this looming void becomes more tangible and undeniable, its character becomes almost approachable. In some works, there is an endearing shyness to the black masses peering over rooftops or peeking around buildings. Lee does not so much demystify oblivion as render it surprisingly friendly.

Likewise, Lee’s Death Landscapes (2008–) feel oddly familiar despite their vague forms. Given Lee’s background in commercial illustration, all of his images have a distinctly graphic quality that makes elements of his work identifiable despite the fact that they address the fundamentally unknowable. The playfulness of Death Landscapes comes less from a direct characterization of death than from the oblique admixture of the abstract and the recognizable. A collage from Death Landscapes II (2015) is an eerie landscape, with ghostlike tendrils drifting upward from a dark island on the pale page. But from the center of this mass juts a bright rectangle on a pole—part stadium lights, part marquee, part basketball hoop. The result is a disjunction that feels playfully absurd, simultaneously serious and silly. The work’s formal reference to signage flirts with a critique of capitalism before it veers past the political and into the existential. It seems to say, “Sure, commercialism is absurd, but how about death?” 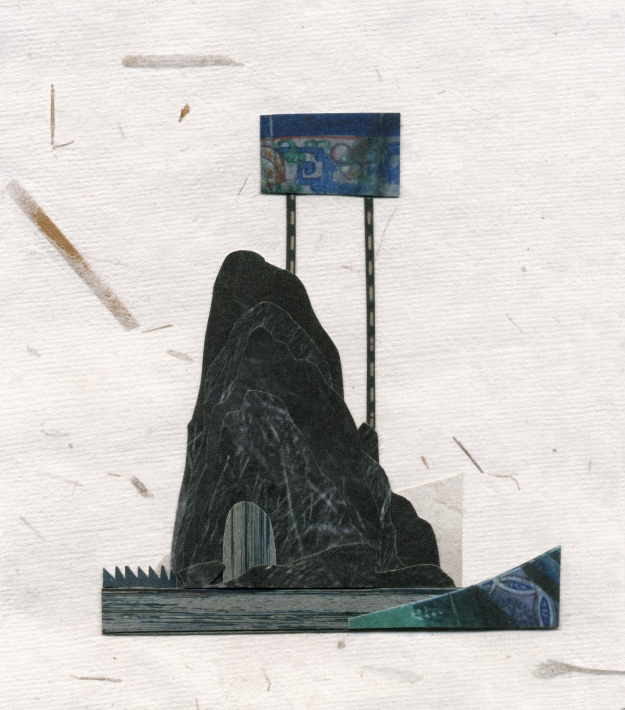 In his Death Landscapes, Lee’s characterization of the incongruities between the unidentifiable and the concrete produces an effect that is pleasantly somnambulistic in its strangeness. The viewer is asked to accept an unknown element as part of the visual lexicon, inviting it to become familiar while remaining mysterious. In one piece, a rocky black outcropping reminds one of a gate to the underworld, but the billboard-like sign above it complicates any sense of solemnity the form may suggest. This juxtaposition does not make the landscape more comprehensible, but it does make it less frightening. The artist’s overall proposition is a consent to the liminal—an uneasy assumption that the unknown is not necessarily an existential threat but rather simply curious.

Lee’s most recent series, Death Landscapes III (2016), is a more somber affair. Using collaged plain paper to suggest landscapes, these works lack the graphic juxtaposition of color photographs and black shapes that had given his previous works their liveliness; they instead convey a more tactile exploration. Their physical qualities of light and shadow reveal the landscape forms within a funereal cast of bone white. But while this series loses the playfulness innate to many of Lee’s other pieces, it gains a material presence. Here, Lee’s expression of absence is most tangibly felt—the void an extension of material form rather than a refutation of it. This is the ultimate ethos of Lee’s work: that strangeness is familiar, that the unknown is recognizable, and that the void is undeniably present.

Matt Lee is an artist, illustrator, design consultant, and educator. His work has been published by Gestalten, Creative Review, and NY Arts, and has been exhibited across North America, Europe, and Asia, including the Centre Pompidou in Paris, the Mall Galleries in London, and the Alla Prima International Art Fair in Delhi. Originally from the United Kingdom, Lee currently lives in Bangalore, in southern India. He has a passion for Indian matchboxes, surf music, and preppy clothes. He can be found on Instagram (@mattrdlee) and Twitter (@mattlee).

Last week photographer Ronan Haughton took my portrait as part of a series on artists in Bangalore. We spent an afternoon drinking very hot coffee at Koshy’s and observed the dinosaurs of Cubbon Park. We then got drenched by the monsoon rains and went home.

Ronan is an Irish freelance photographer based in the UK and India. His work focuses on travel, people and culture. Find out more about Ronan’s work on his blog. 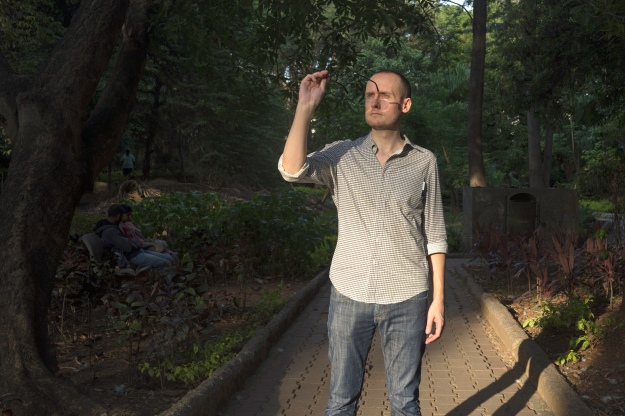 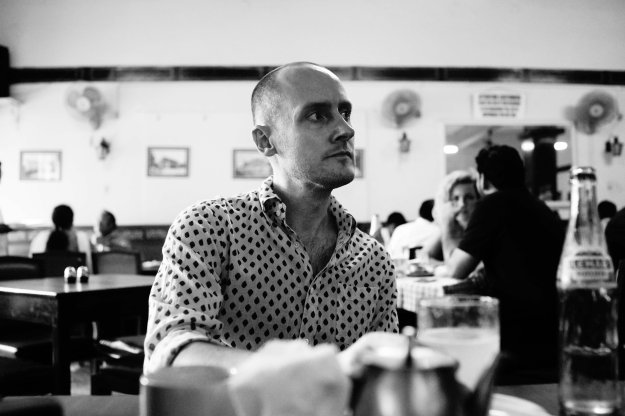 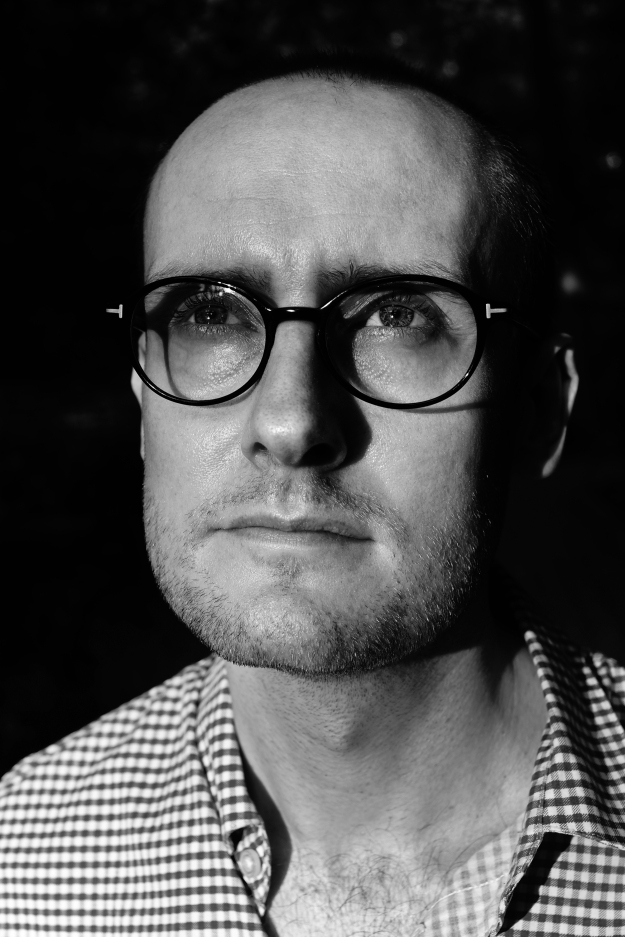 ‘Sandown’ is a new series that re-appropriates iconography from a collection of Indian matchbox labels and situates them on an isolated beach in the south coast of England. The bringing together of these contrasting visual elements creates a tension between culture and context.

The common thread through the series is the horizon line, which holds together a fragmented narrative where animals and objects, out of place in this setting, are in an awkward and nonsensical dialogue with each other. 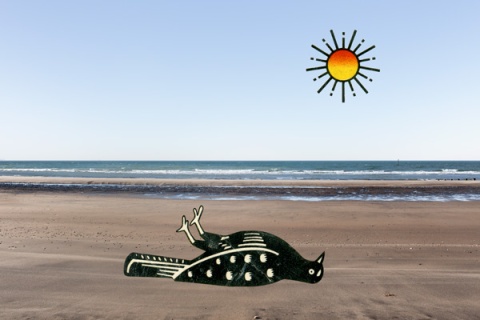 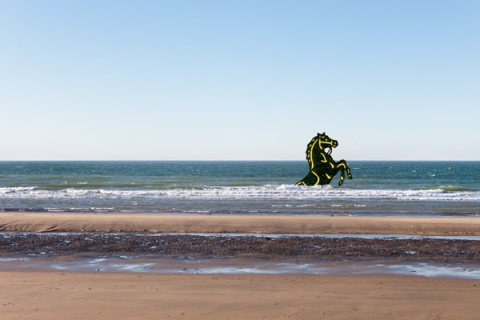 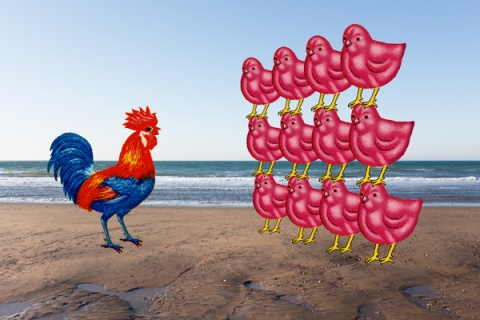 Volume Magazine is a biannual publication that publishes and promotes Britain’s newest creative talent across the arts, music and fashion. They present a trend-forecasting catalogue of contemporary creativity. This week I am Their Photographer of the Week.

Last year I completed an MA in Digital Arts at Camberwell College of Arts. Today I found out that my Masters work is the new homepage image for the University of the Arts London website. Considering the quality of student work that comes out of these six London art colleges, this really is a huge honour.

This blog is updated with news of projects, exhibitions, events, commissions etc.